The weekly clinical conference covers topics of interest in endocrinology. Speakers include faculty from the division, fellowship trainees, and guest speakers. Clinical cases are often used as a springboard for discussions of endocrine disorders, including patient care issues and reviews of the current research. Once a month, the conference is run by the Metabolism, Endocrinology & Diabetes (MEND) Consult team and is devoted to reviewing the interesting patients seen on the Consult Service. 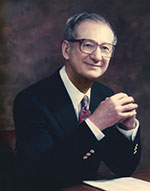 This annual lecture is in honor of Stefan S. Fajans, MD and recognizes a renowned diabetes investigator and/or physician who has made significant contributions to the field.

Dr. Fajans was active professor emeritus of the Division of Metabolism, Endocrinology & Diabetes, and was recognized nationally and internationally as a distinguished endocrinologist and leader in the study and treatment of diabetes. He worked at the U-M Hospital from 1946 until shortly before his death. He rose to the rank of Chief of the Division of Endocrinology & Metabolism, and was founding director of the NIH-funded Michigan Diabetes Research and Training Center for many years, before becoming active professor emeritus in 1988.

Dr. Fajans' pioneering research included the demonstration of the involvement of amino acids and proteins on insulin secretion. He made novel contributions to the knowledge that diabetes was not a single disease, but consisted of several subtypes with different causes.

He was the first to describe a subtype of type 2 diabetes, Maturity-Onset Diabetes of the Young (MODY). Dr. Fajans co-published the first paper to describe a genetic marker of MODY and the gene itself. From the time of his official retirement, he continued an active research program on MODY. In the last few years before his death, he published five articles in scientific journals on various aspects of diabetes.

An endocrinologist and specialist in diabetes mellitus, John C. Floyd, Jr., MD, was known for his expertise in and dedication to scientific research, medical education, and patient care. Over a career of more than 30 years, his work demonstrated the importance of integrating all of these areas of medical endeavor in establishing patient-centered, innovative care for the specific needs of the diabetic patient. He served on the faculty of the University of Michigan’s Department of Internal Medicine, in the division of Endocrinology & Metabolism (E&M), from 1961 until his retirement 1992 at which time he was appointed Professor Emeritus.

Dr. Floyd was born in Olla, Louisiana, and raised in Baton Rouge. He graduated from Louisiana State University (LSU) in 1949 with a BS in chemistry and went on to the California Institute of Technology for graduate studies. However, after a few months, he decided that medicine, which combined his love of science with his interest in people, might be a more fulfilling career than chemistry. Returning to Louisiana, he enrolled at the LSU School of Medicine and received his medical degree in 1954.

Upon graduation from LSU, Dr. Floyd completed his internship, residency, and further postdoctoral training at the University of Michigan’s Division of Nuclear Medicine in the Department of Internal Medicine. It was as an intern in 1955, during his surgical rotation, that he was by chance assigned to observe what proved to be a ground-breaking operation. Based upon extensive metabolic studies, Dr. Jerome Conn, Chief of the E&M division, and his colleagues had hypothesize that the patient’s disease was caused by over-production of an adrenal hormone, a previously undescribed condition Dr. Conn termed “primary aldosteronism”, and surgical removal of both adrenal glands was planned. However, to what has been described as “the immense delight” of Dr. Conn and other observers in the operating room, the surgeon found a benign tumor on one adrenal. The tumor was removed, the patient’s symptoms subsequently abated and this linking of an adrenal tumor to primary aldosteronism led to new treatments for that condition. It was this early experience that piqued Dr. Floyd’s interest in the field of endocrinology.

In 1959, having completed his post-graduate training at Michigan, Dr. Floyd accepted an appointment at LSU as Instructor of Internal Medicine. However, his intense interest in clinical research led him to pursue returning to the University of Michigan. Then E&M faculty member Dr. Stefan Fajans (presently MEND Professor Emeritus) recalls receiving the phone call from Dr. Floyd: “He called me one evening and asked whether there might be a place for him in our Division of Endocrinology & Metabolism, and indeed there was for someone of John’s caliber.” Dr. Floyd returned to Michigan as a Fellow in the E&M division in 1960 and was appointed to the medical faculty the following year. It was during this time that he began to focus his attention on diabetes-related research and the treatment and care of diabetic patients; these interests were to become his life-long work.

Dr. Floyd passed away in 2006. In 2007, the John C. Floyd, Jr., Memorial Fellows Lecture was established by the MEND faculty, with the support of his wife of 54 years, Esther Martin Floyd. Each year, the speaker for the lecture is chosen by the MEND Fellows, who also issue the invitation, schedule and coordinate the visit, and select one of their members to introduce the speaker. The Floyd lecture thus honors Dr. Floyd’s commitment to post-graduate medical education and recognizes his outstanding dedication, contribution, and service in the field of endocrinology at the University of Michigan.

David Schteingart, MD, gained widespread recognition in the field of Endocrinology. Throughout his remarkable career, Dr. Schteingart authored 98 publications in peer-reviewed journals, 33 book chapters, and 80 abstracts. One of his most notable collaborations was with his wife of more than 50 years, Monica Starkman, MD, MS, of the Michigan Department of Psychiatry, and their groundbreaking research on the brain effects of chronic glucocorticoid exposure, using Cushing’s disease as a model.

Dr. Schteingart was also a recognized international expert in the treatment of adrenal cancer. With support from U-M football coach Bo Schembechler in honor of his wife, Millie, who was stricken with adrenal cancer, Dr. Schteingart founded the Millie Schembechler Adrenal Cancer Program in 1993 and served as its Director through 2005. He and his collaborators went on to publish collectively in the New England Journal of Medicine, and the U-M Adrenal Cancer Program gained national and international recognition for its leadership in the management of patients with this rare disease. From these beginnings emanated the current Endocrine Oncology Program of the U-M Rogel Cancer Center.

Dr. Schteingart supported and trained more than 100 young investigators in clinical research across disciplines, including individually mentoring many of them himself. In March 2012, Dr. Schteingart was honored with a special Lifetime Achievement Award for Mentoring in Clinical and Translational Research from the Michigan Institute for Clinical & Health Research (MICHR) for his commitment to excellence in research training.

Dr. Schteingart showed a never-give-up spirit in his academic and personal life. He was committed, through and through, to the essential missions that make the University of Michigan Medical School strong: care of people who needed him, the quest for knowledge, and the passing of that knowledge to others.