To develop new forms of x-ray scintillators for imaging the megavoltage beam used to treat cancer in external-beam radiation therapy. The goal is to improve visualization of soft tissues in tomographic x-ray images acquired at low, clinically practical x-ray doses.  Our lab is developing detectors based on thick segmented crystalline scintillators to replace the relatively thin phosphor scintillators presently used in active matrix, flat-panel imagers (AMFPIs) designed for radiotherapy.  Such devices can also be adapted to the needs of various forms of non-destructive testing. 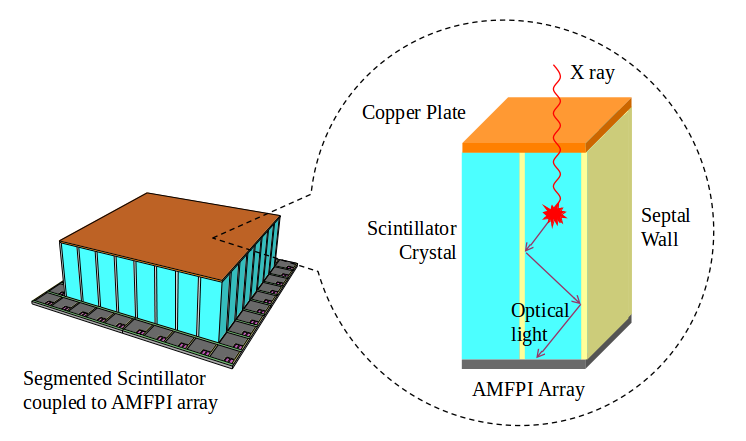 The significant improvements in x-ray detection efficiency sought in our research will make it possible to achieve soft-tissue contrast, even at the lowest doses delivered by radiotherapy treatment machines.  Moreover, such improvements will make it possible to acquire tomographic imaging information (requiring ~100 projection images) at the same dose presently required for a single projection image. Such improvements are expected to significantly assist the basic medical objective of maximizing the dose to the tumor while minimizing dose to surrounding normal tissue.

In partnership with industrial and national lab collaborators, we design, fabricate and/or evaluate prototype segmented scintillating converters providing x-ray detection efficiencies ranging from ~7% to 50%. The performance of these prototypes is extensively investigated and can include demonstrations of computed tomography using experimental set-ups such as that depicted in the adjacent illustration. 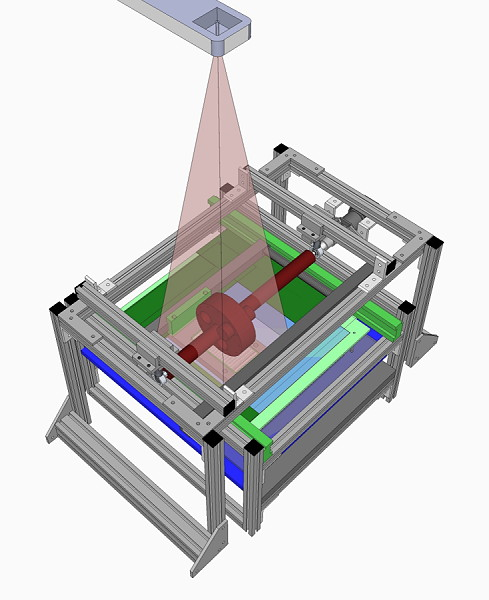 This research has been funded by the National Institutes of Health / National Cancer Institute, and by Alamos National Lab as well as by our department.