Founder of MDisability and U-M Family Medicine Chair, Dr. Philip Zazove, reflects on his career as a family physician with hearing loss and his advocacy for those with disabilities

Michigan Medicine is establishing a Disability Health Endowment in honor of Dr. Zazove, who will retire in June, to promote and support all disability health efforts within the Department of Family Medicine. 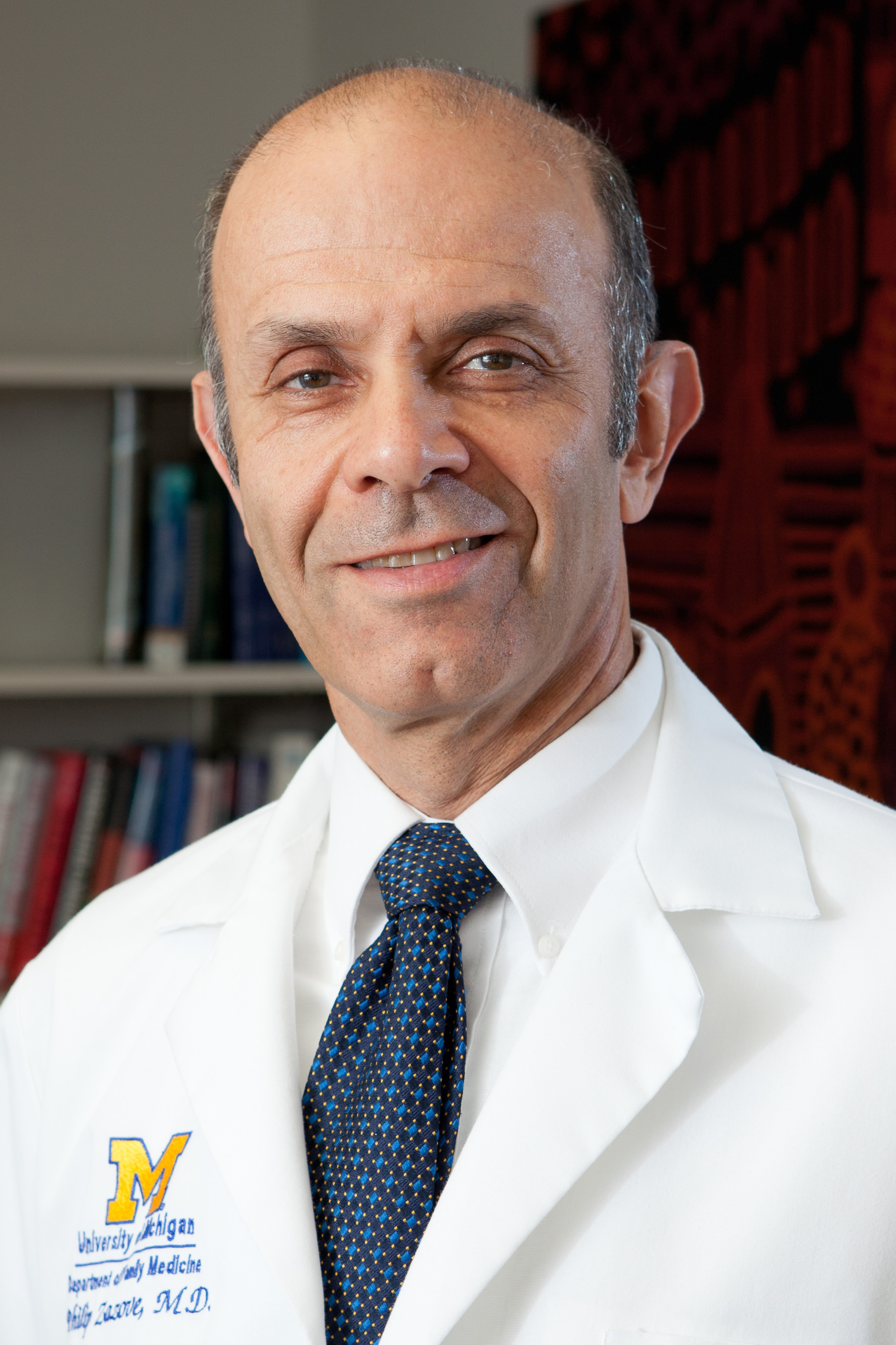 Philip Zazove, M.D., as a family physician who has lived his life with profound hearing loss, is well acquainted with overcoming adversity. He’s had to prove himself repeatedly as someone who is just as competent and capable as someone who does not have a disability.

This was true from an early age, as he attended public school as a child growing up in Lincolnwood, Ill. (near Evanston and Skokie), where he was one of the first deaf children mainstreamed in the northern Chicago suburbs. He then attended college at Northwestern University.

Dr. Zazove decided to attend medical school upon graduation from Northwestern. Due to his deafness, he faced countless rejections by medical schools before finally gaining admittance at Rutgers Medical School. Despite those ongoing challenges, he was able to establish his own medical practice in Utah in 1981, and then joined the University of Michigan as an assistant professor in 1989.

Dr. Zazove has served as the second George A. Dean, M.D. Chair of Family Medicine in the Department of Family Medicine at the University of Michigan (U-M) since 2011 and is now ready to retire after a lifetime of impressive achievements, including the creation of MDisability.

“It’s time for someone with new ideas and energy to come in,” said Dr. Zazove, who turned 70 in 2021. “Also, I’m ready to spend more time with my wife (Barbara Reed, M.D., MSPH, professor emeritus of family medicine at U-M).”

Dr. Zazove leaves behind a tremendous legacy as a deaf clinician and researcher. He has tirelessly advocated for health care for people with disabilities and has pushed for changes that have opened access to medical school education to students who also have disabilities, not only at U-M but across the globe.

Dr. Zazove said that many physicians are still unaware of the health care experiences and accommodation needs of those with disabilities. And, many clinicians also feel uncomfortable treating this patient population, even though over 20% of Americans (approximately 61 million people) have an existing disability. This inspired him to spearhead the MDisability program during his time as department chair and emphasizes the program's importance.

“There’s so much work to be done in improving the health and lives of people with disabilities – and most of us will develop a disability at some point in our lives,” he said. “My hope for MDisability is that it will continue to grow, will add more faculty expertise in various areas of disabilities, and will truly make an impact on society.”

One of the ways MDisability is contributing to student and faculty expertise in caring for people with disabilities is through the inclusion of disability-related curriculum in medical school education. MDisability has partnered with the Medical Students for Disability Health Advocacy (MSDHA) in offering an American Sign Language (ASL) course for first-year medical students, which teaches them ‘signs’ and about Deaf culture. The first ASL course took place in fall 2021 and a second course began in March 2022.

Through the DHE, students are introduced to elements of disability theory, clinical practice, disability law and implications for policy. The course also incorporates small group discussions and online training with the Leadership Education in Neurodevelopmental and Related Disabilities (LEND) program.

The overarching goal of the DHE is to enable medical students and future healthcare providers to be able to provide a person-centered approach to caring for patients who have disabilities. This effort is to improve quality of care and reduce disparities in health outcomes for people with disabilities.

In addition to educational programs and health care efforts, some of the other programs Family Medicine faculty launched through the MDisability program include: 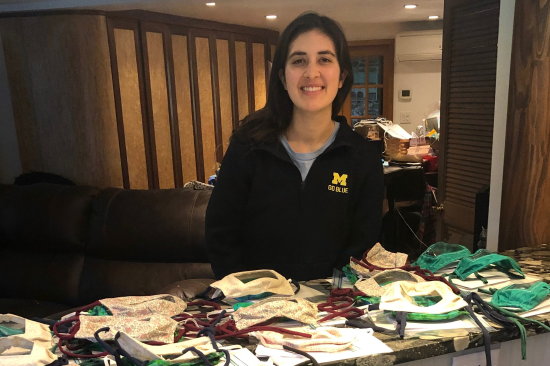 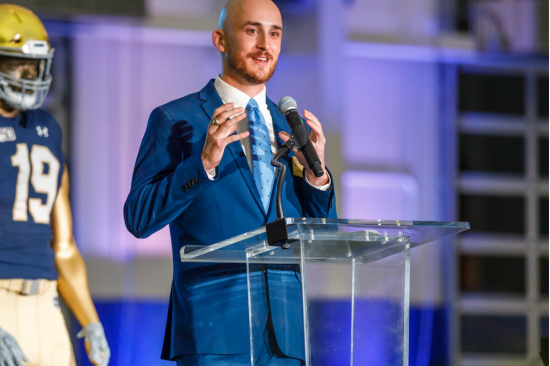 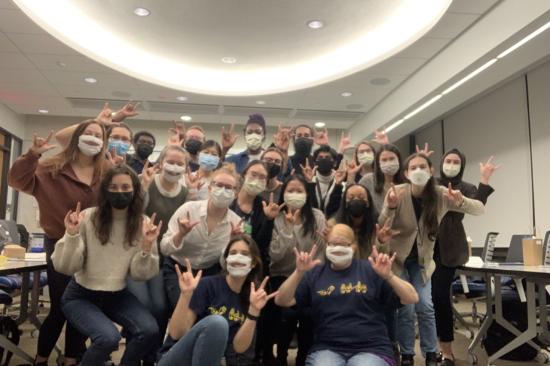 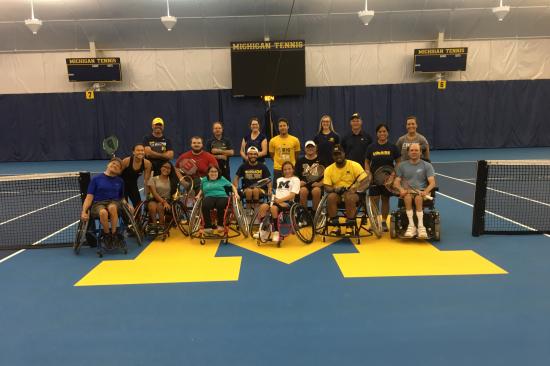 To commemorate all that Dr. Zazove has contributed to the Department of Family Medicine, to his patients, especially those who have disabilities, and the impactful research he has conducted and published over the decades, the Department of Family Medicine is establishing the Philip Zazove, M.D. Disability Health Endowment Fund at Michigan Medicine.

The fund will promote and support disability efforts in the Department of Family Medicine and across Michigan Medicine, including patient care, research, education, and community outreach, with an overarching goal of access, equity, and inclusion.

Under Dr. Zazove’s leadership, the Department of Family Medicine has taken an active role in caring for those with disabilities. For example, they have advocated for making changes in COVID vaccine site layouts so that patients with all types of disabilities can use them.

Their work also includes the establishment of Michigan Medicine’s Deaf Health Clinic. Dr. Zazove, along with Michael M. McKee, M.D., MPH, associate professor, who also has hearing loss, serve as co-directors. The Deaf Health Clinic is the only one of its kind in Michigan and is in Dexter. The clinic serves deaf patients from across the state. Dr. McKee is also director of MDisability.

Additionally, Zazove has played a role in addressing inappropriate technical standards for admission to medical schools; the provision of accommodations that are appropriate for medical students; and working with state and national organizations to support medical professionals with disabilities. 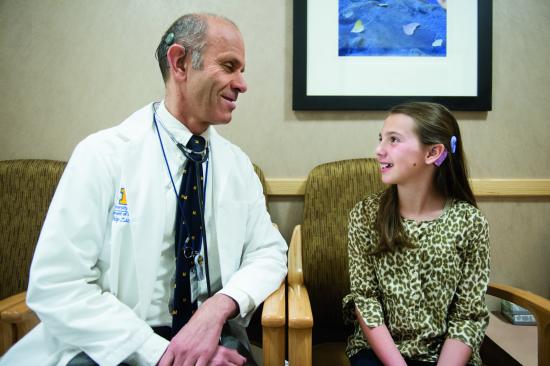 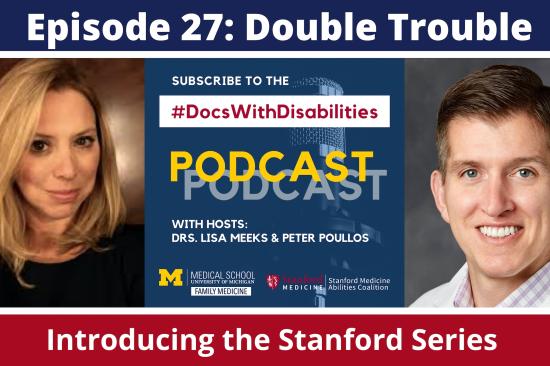 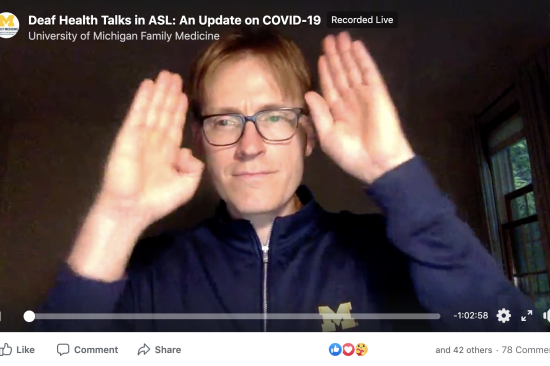 Charting his Own Course as a Family Physician

As someone who grew up in in the 1950s and ‘60s, Dr. Zazove knows the daily obstacles that someone who is deaf or hard of hearing faces. Some of these barriers still exist today.

Though academic and professional expectations were low for Dr. Zazove, his parents, Earl and Louise, both physicians, refused to send him to a state school for deaf children and instead enrolled him in public schools. He drew support and inspiration from both, especially his mother.

“Every successful younger person with a disability I’ve met had supportive parents or mentors,” Dr. Zazove said. “I think that’s also what really allowed me to be so successful. I was always told I could do what I wanted. Perhaps the fact that my mother grew up poor and had to overcome many obstacles to become a physician indicated to me that many obstacles can be overcome with perseverance and hard work.”

Dr. Zazove matriculated at Rutgers Medical School, then transferred to and graduated from Washington University School of Medicine in 1978. He also graduated with honors from the Executive Master's Program at the Kellogg School of Management at Northwestern University in 1994. He has authored two books, including an autobiography, “When the Phone Rings, My Bed Shakes: Memoirs of a Deaf Doctor.”

“When I started in practice, there was little support for and recognition of the health issues that people with disabilities have,” he said. “As a physician with hearing loss, I couldn’t hear the beeper go off and there was no text available to read, just a voice I couldn’t understand or even hear. Now we have cell phones that vibrate, with text that can be read and responded to.” 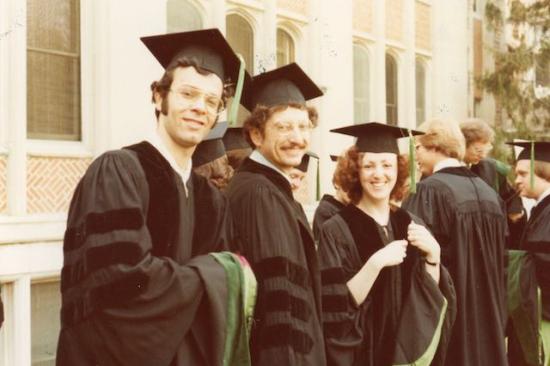 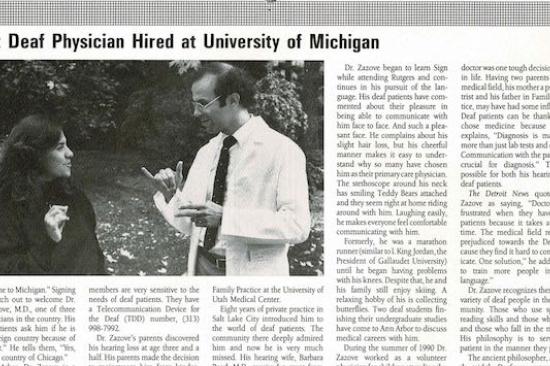 George A. Dean, M.D., now in his 90s and a leader in the Jewish community, pioneered the field of family medicine in the United States and was instrumental in establishing the Department of Family Medicine at Michigan. Additionally, he contributed to U-M in 2006 for the establishment of the chair that Zazove will soon relinquish. 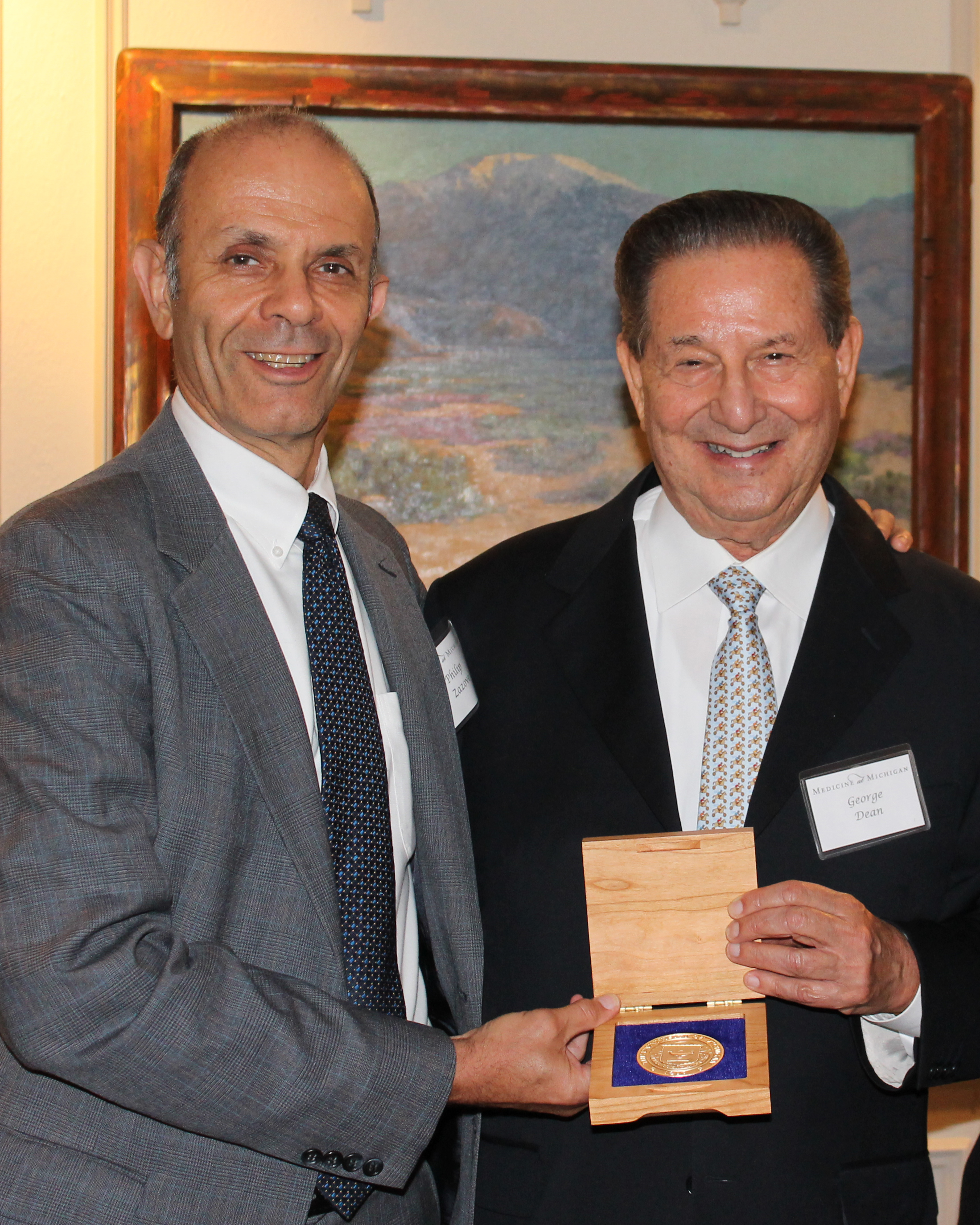 Dr. Dean said that he developed a close relationship with Dr. Zazove in the time that Dr. Zazove was department chair.

“He is a magnificent example of someone who has overcome a disability and become chair of one of the best Family Medicine departments in the country,” he said. “Very quietly and very unassumingly, Phil has been able to create this wonderful department and advanced the need for disabled people to receive excellent health care. He has gone above and beyond his duties as chairman. I can’t speak more highly about what he has created.”

Dr. Dean, who practiced family medicine in Southfield, Mich., also throws his full support behind the establishment of the Philip Zazove, M.D. Disability Health Endowment and encourages others to contribute to the fund.

“The endowment perpetuates the leadership that Phil has shown in disability health, and I think that is so important today,” said Dr. Dean. “He’s a perfect role model” as a family physician who cares for all patients with kindness and compassion.