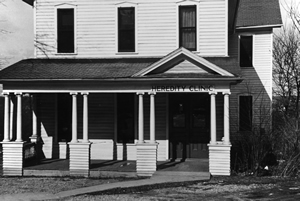 The Department of Human Genetics was established at the University of Michigan in 1956 and is recognized as the first dedicated human genetics department in the USA. James V. Neel MD PhD, initially hired to direct the hospital Heredity Clinic, petitioned the Medical School to establish an academic, basic science department that would be an international leader in this nascent field. Dr. Neel chaired the Department for 25 years (1956-1984). He recruited faculty with a broad definition of research in human genetics, which ultimately included viral and bacterial genetics, model organism genetics, somatic cell genetics, familial genetics, and population genetics.

After a period of interim chairs that concluded with Dr. Miriam Meisler PhD (1986-1987), Thomas D. Gelehrter, MD was appointed as permanent Chair. During his 17-year term (1987-2004), Dr. Gelehrter expanded the Department with faculty recruitments in molecular genetics, transcriptional regulation, transgenic technology, mouse models of human disease, medical genetics, gene therapy, population genetics, and statistical genetics. During this time, the Department extended the training of PhD and Masters degree students in basic genetics science, and established a Masters degree program in Genetic Counseling. The faculty numbers ranged between 8-10 primary appointees during the tenure of Dr. Neel and increased to a range of 10-12 under Dr. Gelehrter. Joint appointments were extended to faculty in several Medical School departments by Dr. Gelehrter, reflecting the growing impact of genetics across the spectrum of human bio-medical research.

In 2005, Dr. Sally Camper PhD was appointed as Chair. Dr. Camper served the Department for 11 years (2005-2016). During her tenure, the Department continued to grow using dedicated faculty lines granted with the new chair appointment. Dr Camper also successfully recruited to cross-departmental Medical School initiatives and open competitions through the University President’s office. In 2007, UM President Coleman initiated a program supporting 100 new Assistant Professors to be hired in interdisciplinary clusters, university-wide, over an 8-year period. In the competition for new scientific area proposals, the Department of Human Genetics obtained 4 of the 100 slots. In total, under Dr. Camper’s lead, the primary faculty roster was 14-20. At the same time, joint faculty appointments were expanded, to a range of 10-16.

The 60-year history of the Department of Human Genetics is, in many ways, a microcosm of the fields of human genetics, genomics, and genetics education. Beginning as a cluster of basic scientists on the margins of human health care, the Department has expanded in faculty numbers and research breadth. Strong, stable, and forward-looking leadership – combined with support and investment from the University and Medical School – has yielded a vibrant and innovative community of teachers and scientists.

The Department of Human Genetics at the University of Michigan Medical School is devoted to advancing the fields of genetics and genomics to further our understanding of biology and human disease. This mission is accomplished by: (1) generating knowledge through our research programs; and (2) providing mentored training in genetics to the next generation of scientists and clinicians. These goals are pursued with close attention to building a healthy and productive departmental community and to increasing inclusion, equity, and diversity in all areas.