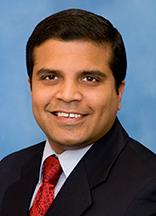 Dr. Neeraj Chaudhary is a neurointerventionalist by practice. Dr Chaudhary is a physician neuroscientist with two R21 NIH grants to his name. He is one of the few Neurointerventional Radiologists in the USA, certified by the Society of Neurosurgeons (SNS) with a Certificate of Advanced Subspecilaty Training (CAST) in Neuroendovascular Surgery (NES). In addition he is the only Neurointerventionalist practicing in USA certified by the European Board of Neurointervention (EBNI) as well. He is interested in a deeper understanding of the basic science of iron handling following intracranial hemorrhage in humans. He is studying the translation of animal level data on iron mediated neurotoxicity in ICH, to the human subjects. He works under the auspices of the department of radiology and neurosurgery. He has a strong depth in his post graduate training (12 years) including 4 years of general surgery residency (1998 – 2002) and 4 years of Radiology residency (2002 – 2006) in the UK. He moved to the UK after his graduation from medical school in India (University of Calcutta – Kolkata Medical College & Hospital; 1989 – 1997) yearning to get to the source of Medicine (London, England) to get the best training in medicine in the world.

Dr. Chaudhary completed his training in two specialties with UK Board certification in each (Gen Surg – Member of the Royal College of Surgeons MRCS – 2000 & Radiology – Fellow of Royal College of Radiologists FRCR - 2006). His interest in Neurosciences led him to enhance his post graduate training initially in diagnostic neuroradiology (Fellowship – 2006 to 2007 – National Hospital for Neurology & Neurosurgery NHNN, Queen Square, University College London Hospitals NHS Trust) and then 2 years neurointerventional radiology (Fellowship: 2007 to 2008 – NHNN London UK & 2008 – 2009 University of Michigan Health System, Ann Arbor). His training in neurodiagnostic and neurointerventional Radiology was further reinforced by apprenticeship in advanced neuroimaging and neurointerventional procedures in the pediatric population at the Great Ormond Street Children’s Hospital, UK (probably one of the busiest Neurovascular practices in the world) as part of his training at NHNN Queen Square, UK (2006 -2008). He then joined the department of radiology at the University of Michigan as faculty from 2009.

Dr. Chaudhary works in a team of excellent and very talented practitioners across the departments of radiology, neurosurgery and neurology as a neurointerventional radiologist treating patients with neurovascular diseases of the entire neural axis (brain and spinal cord) including head, neck, face and orbit vascular malformations in adults and pediatric age groups. His research interests are in understanding the patho mechanisms of neural injury in hemorrhagic and ischemic stroke. He is involved in both clinical outcomes research and bench side basic science research where he collaborates with the cerebrovascular lab at BSRB with Professors Guohua Xi and Richard Keep.