A prescription to ward off cognitive decline – without medication

A clinical neuropsychologist with expertise in dementia shares what the science tells about improving memory and thinking without drugs. 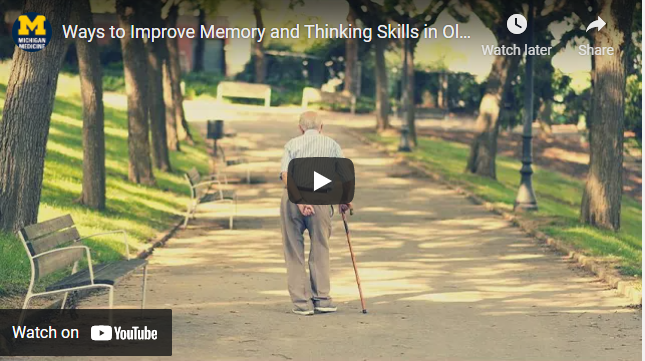 There’s a pill for many ailments, but aging isn’t one of them.

And while some mounting difficulty in thinking and processing is expected as you grow older, cognition experts say you can take steps to slow it down, no prescription required. Benjamin Hampstead, Ph.D., recently explained what we know about three key ways to improve memory and thinking with age that don’t involve medication. The first two, exercise and cognition oriented treatments, are available to anyone, and the third, neuromodulation, is currently being studied as a non-pharmacological option, but it’s not yet available to the general public.

“We’re actually able to change the brain, even in the face of things like Alzheimer’s disease,” Hampstead said.

Hampstead, a named professor of psychology at Michigan Medicine who also cares for patients at the VA Ann Arbor, is the clinical core leader at the statewide Michigan Alzheimer’s Disease Research Center.

What to expect—and accept—in cognitive decline with age

And dealing with life adjustments like retirement, losing loved ones or needing more medical care can all pile up over the years, leading to more stress on top of those other thinking difficulties.

“If we’re stressed, we’re more likely to perceive that we’re having greater difficulty even if we’re not,” Hampstead said.

But when someone gets to the point that they’re dealing with changes in cognitive abilities and they’re unable to function well in daily life, that combination is what creates the syndrome of dementia, he said.

“Exercise has multiple beneficial effects,” Hampstead said. He said there’s evidence it can reduce symptoms of depression and anxiety, improve blood flow throughout the body, which fuels the brain, and improve brain structure and function.

“People who are more physically active have better cognitive functioning across the lifespan,” he said. “Exercise can reduce the risk of dementia, but fewer than 5% of adults get the recommended amount, which is 30 minutes a day… we tend not to prioritize it.”

He noted that studies showing improvement in thinking and planning showed those benefits after months of regular exercise – not just one trip to the gym here and there.

We see the benefits with both cardio and weight training, Hampstead added.

Cognition oriented treatments involve a range of activities that are designed to maintain existing strengths and improve or work around areas of weakness.  Hampstead and his team have shown that some of these methods can engage both preserved and altered brain regions.

One of their studies reported that these strategies appeared to re-engage brain regions that change with age and diseases like Alzheimer’s.

Rehearsal-based approaches like computer programs can help you learn something specific, like names of new people you’ve met at church, he said. The problem is that you’d have to do the same process every single time you want to learn a new piece of information, and you can’t expand what you’ve memorized to other areas of cognition that you want to improve.

He added that with memory games, it’s clear you’re going to get better at the games that you practice. But, it’s less clear how well these repeated exposure programs transfer to our everyday life, though some evidence is growing that improvement may be seen in some executive abilities like multitasking and planning.

Calendar alerts, notebooks, making lists in our phones – it’s common for adults at any age to use these external aids.

“Even if our brain is perfectly healthy we know they’ll improve our functioning,” Hampstead said.

But relying on our smartphones for all of these details can make for an awkward moment in a social situation, needing to look up someone’s name before you say hello or difficulty when you can’t find the information you know you wrote down because you take so many notes.

Hampstead said one of his favorite of the cognition oriented treatment techniques for people whose cognitive abilities are still relatively strong is the use of mnemonic strategies. That involves a memory training trick so you have a rule that can be used with new information.

For example, when meeting someone new, you can try using distinguishing features to create a story that links those features with their name. Many find that using a mental image or “movie” of these things also helps, Hampstead said.

People who use mnemonic strategies for memory training have had a slower decline of their cognitive and everyday functioning.

Hampstead said some insurance providers will cover cognition-oriented treatments like these.

Hampstead explained a different approach, known as neuromodulation, which can inspire neurons to fire across the brain. He’s seen these approaches help people dealing with language deficits find the right words they’re looking for.

The research is exciting, Hampstead said, but these approaches are not FDA approved, so they’re done as part of research studies and are not available to the general public.

Hampstead and his team are trying to figure out the best way to translate the research into useful options to offer patients: What should a successful treatment for a real patient look like, in terms of how much brain stimulation should be provided and for how long, and which patients would benefit most?

One option under the neuromodulation umbrella is a little less known: transcranial direct current stimulation, known as tDCS. Hampstead’s team is actually combining this brain stimulation with brain training in some of their studies to see if it could be a one-two punch against decline. Finally, they are developing methods that build on common clinical tests, such as MRI or PET brain scans, to develop individualized treatment programs.

Hampstead and his team are also evaluating other types of neuromodulation to evaluate whether one approach is better than others for specific individuals.

Hampstead is currently trying to build a translational clinic that offers a combination of these treatment methods for those suffering from cognitive impaired because of injuries or diseases that affect the brain.

“I am excited and optimistic that, while these methods won’t cure people, they provide additional options that may help people function as well as they can for as long as they can,” he said.

Learn more about Hampstead's program and about opportunities to support the team’s work.

This article first appeared on the Michigan Health Blog