Normal aging, mild cognitive impairment, and dementia are commonly used terms, but often confused, and deserving of a brief review.

Dementia is not a part of the normal aging process. Dementia is an umbrella term that represents distinct cognitive decline in multiple domains (e.g. memory, visuospatial functioning, language, attention). The change is apparent to the patient, family, and/or clinician, and there are objective deficits seen on cognitive testing. Most importantly, the cognitive changes result in functional impairment. In general, complex tasks are affected first (driving, managing finances, preparing meals) with gradual progression to involve more routine daily tasks (bathing, dressing, feeding oneself). Psychiatrists use the term “major neurocognitive disorder” to encompass dementias and disorders affective cognition that are static in nature (TBI).

The term mild cognitive impairment (or mild neurocognitive disorder) represents a middle ground between normal aging and dementia. In this case, the patient or family is aware of some cognitive change that is also identified on testing. However, the patient remains fully independent with all functioning.

Neurodegenerative illnesses can be associated with other neurological findings that help provide diagnostic clarity. An example is Parkinson’s disease dementia and Dementia with Lewy Bodies, which can present with tremor, rigidity, sleep disturbance, hallucinations, and depression. 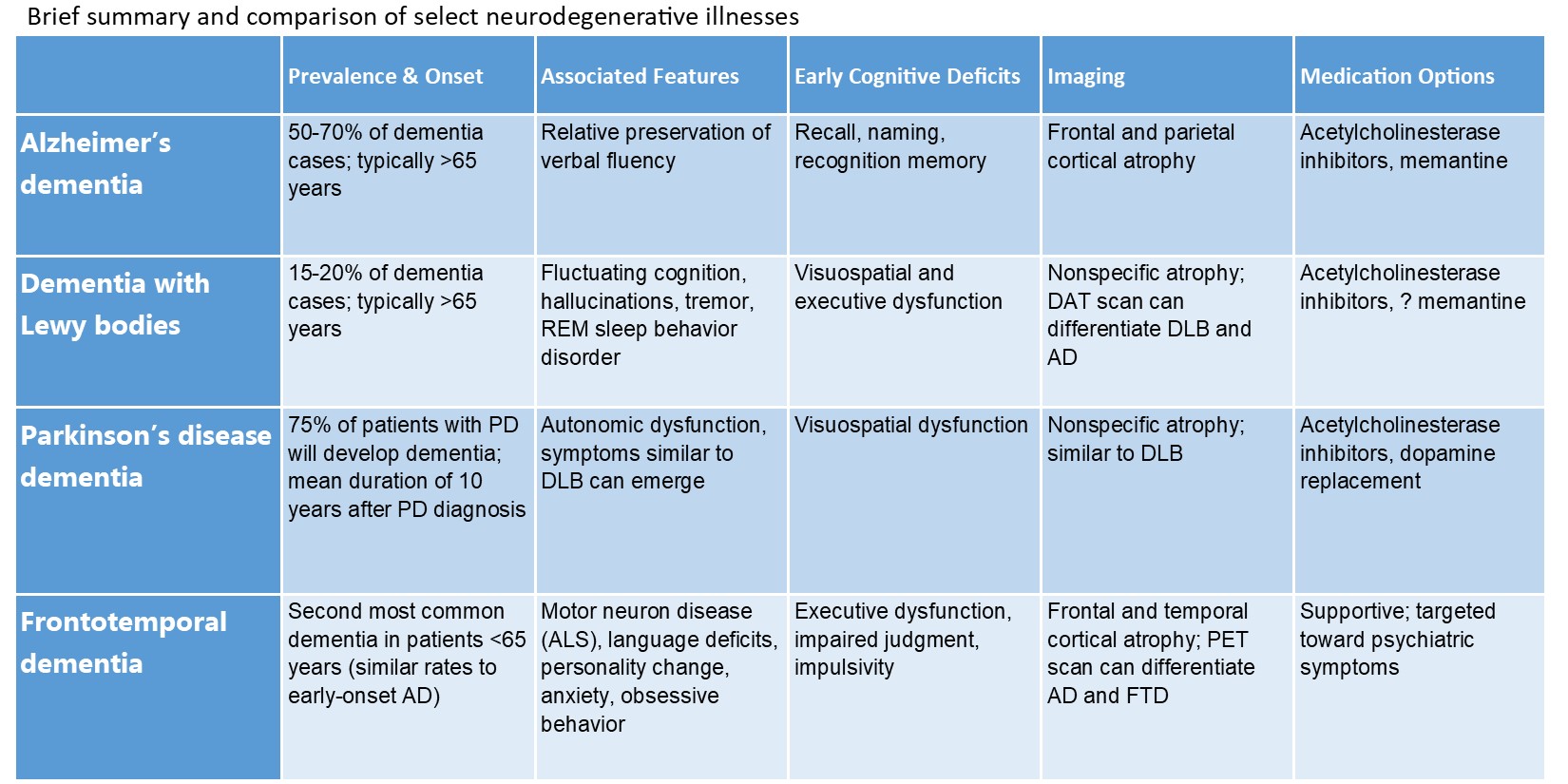 How do I screen for it?

An assessment for dementia involves detailed history from the patient and caregiver. Determining the timeline of symptom progression is essential if possible. The onset of cognitive changes in 2 days is likely to represent delirium rather than dementia. Similarly, onset of worsening memory 2 months ago is often better explained by depression.

Do not discount the possibility of substance misuse contributing to cognitive changes. Alcohol and benzodiazepine dependence are the most prevalent in this age demographic and can have a detrimental cognitive impact. Opioids and anticholinergic medications are also potential offenders. Increasingly, cannabis abuse and dependence is being seen in older adults.

A complete functional assessment, including ADLs and IADLs is essential. Whenever possible, input should be garnered from a family member or caregiver, as patients with mild dementia can often mask their deficits in casual conversation or deny any difficulty with daily activities.

The concerned provider should perform some objective screening measure of cognitive performance. Historically, the Mini Mental State Examination (MMSE) was commonly utilized for this purpose. More recently, the Montreal Cognitive Assessment (MoCA) has gained popularity because of its similar ease of administration and improved sensitivity. If time is a factor, the Mini-Cog is a validated instrument and quite sensitive for identifying dementia. The Mini-Cog is a 3-item recall and clock draw.

Once you recognize that cognitive deficits exist, the next step is to try and identify an etiology. We recommend routine studies including CBC, CMP, TSH, vitamin B12 and folate levels, and a brain MRI. In select patients, you can consider EKG, urinalysis, EEG, syphilis and HIV screens, and other specialized studies guided by clinical suspicion. Referral to a neurologist is often appropriate at this juncture to guide further testing, help interpret results, and offer treatment expertise.

Neuropsychological testing is not required or needed for a diagnosis. This is often helpful in cases with diagnostic complexity or uncertainty or if characterizing deficits in detail is important to the treatment.

What are the treatment options?

Treating any potentially reversible causes of cognitive decline is essential. In practice, this is most commonly depression and OSA. However, these and other conditions often exist alongside a neurodegenerative illness. It is rarely helpful to wait and hope that symptoms completely resolve from an episode of depression before addressing the cognitive changes.

Acetylcholinesterase inhibitors are first line medication options for delaying progression of cognitive decline in dementia. Note that these medications do not prevent cognitive decline – a point that must be emphasized to patients and families. These medications seem to be most impactful for patients with Alzheimer’s dementia (AD), Parkinson’s disease dementia (PDD), and dementia with Lewy bodies (DLB). In contrast, their utility is not seen in patients with frontotemporal dementia. There is significant clinical and pathological overlap between vascular dementia and Alzheimer’s dementia, that a trial of donepezil is often warranted, despite poor evidence for use in “pure” vascular dementia. There is some evidence that these medications can help reduce neuropsychiatric symptoms of AD, PDD and DLB.

Because these medications potentiate the effects of acetylcholine, they are prone to causing bradycardia, dizziness, and diarrhea. Excessive diarrhea and fluid loss can contribute to muscle cramps and pain. Lastly, these medications can cause vivid and distressing dreams that can often be avoided by morning dosing.

Depression, vascular disease, and dementia are commonly comorbid syndromes in older adults. Although antidepressants are commonly used in older adults with dementia and depression, studies have found mixed findings on effectiveness. There is some evidence that antidepressants can help reduce behavioral agitation in Alzheimer’s dementia and frontotemporal dementia. Depression is a common occurrence in Parkinson’s disease, and studies support the effectiveness of venlafaxine in this population.

Patients and families often ask about ways to prevent memory loss or minimize changes with dementia. Unfortunately, a simple solution does not exist. The best evidence for reducing the risk of developing dementia involves ways of minimizing cardiovascular disease. Adherence to a Mediterranean diet (low in saturated fat, high in unsaturated fats like omega-3, high fiber, fruits and vegetables, and fish) and regular aerobic exercise are important in reducing risk of cognitive decline, stroke, and geriatric depression. In contrast, a Western diet and sedentary lifestyle portend a worse prognosis.

All major geriatric medicine and psychiatric guidelines recommend behavioral strategies as the first line treatment for problematic behaviors in dementia. Providers are often well intentioned in this regard, but at a loss when it comes to offering specific recommendations. Below is a table with specific non-pharmacological and caregiving interventions organized around particular behavioral disturbances.

Caregivers may be reluctant to comply with these recommendations and pressure you to provide a “quick fix” medication. It is often helpful to remind them that understanding the nature of the behavior and what the individual with dementia is trying to communicate will allow for a more lasting solution. This may also serve as an avenue to screen the caregiver about his/her own coping and degree of stress.

In some instances, medications may be appropriate if the person with dementia is engaging in behavior that is putting himself/herself or others in danger (e.g. physical aggression, wandering). It is essential to remind families and guardians that there is a black box warning for increased risk of death associated with all antipsychotic medication used for behavioral disturbances in dementia. 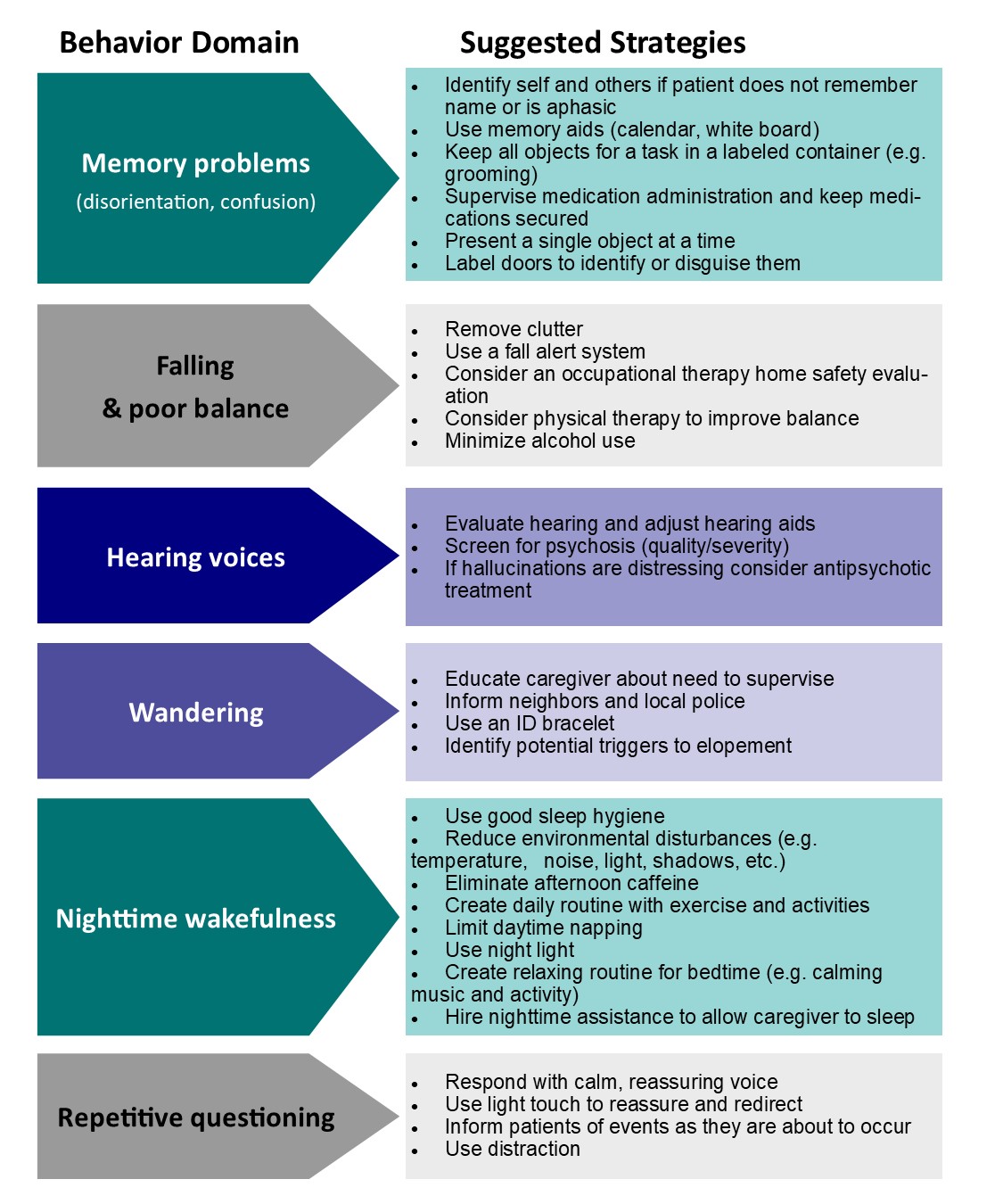