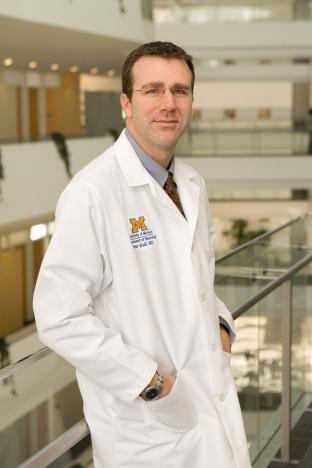 Peter K. Todd, M.D., Ph.D., is an Associate Professor in the Department of Neurology in the University of Michigan Medical School.

Dr. Todd earned his Bachelor of Science degree in 1994 from the University of California, San Diego. He then entered the Medical Science Training Program at the University of Wisconsin at Madison, where he completed his doctorate in 2002 and medical degree in 2004. His Ph.D research focused on synaptic defects in Fragile X Syndrome, a common inherited cause of cognitive impairment in children.

He completed his internship and residency at the Hospital of the University of Pennsylvania in Philadelphia. While there, he did research on the role of the ubiquitin proteasome system and autophagy in Spinal and Bulbar Muscular Atrophy, a polyglutamine disorder, and Fragile X Tremor Ataxia Syndrome (FXTAS). He came to the U-M in 2008 for a clinical and research fellowship in movement disorders and neurogenetics.

Todd joined the U-M faculty in 2010 as an assistant professor in movement disorders and neurogenetics, working in the laboratory of Henry L. Paulson, M.D., Ph.D., in the Center for Neurodegenerative Research.

His current research is focused on the mechanisms underlying RNA-mediated neurodegeneration in FXTAS and myotonic dystrophy, and how these mechanisms may overlap and inform our understanding of other neurodegenerative disorders. He also sees patients with movement disorders and inherited neurological disease.

Dr. Todd has received several academic awards, including a Howard Hughes Undergraduate Research Fellowship, the Francis M. Forester Prize for promise as an academic neurologist, the Samuel Ziritzky Prize for most outstanding research by a neurology resident at Penn and prizes for excellence in research at the International Conference on Unstable Microsatellites in Human Disease, and the U-M neuroscience day. Most recently, Dr Todd received the S. Weir Mitchell Alliance award from the American Academy of Neurology which each year recognizes one early investigator physician scientist who has made important contributions to basic science in neurological disorders.

A member of the American Medical Association and the American Academy of Neurology, he has served as an ad-hoc reviewer for the Journal of Biological Chemistry, Neurology, Proceedings of the National Academy of Sciences, Neuron, Science and Human Molecular Genetics.

This award recognizes a scientist or group of scientists identified as having made outstanding contributions to the Medical School in basic biomedical science research.