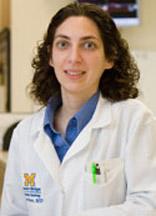 Devin L. Brown, M.D., M.S., is a professor of neurology and director of the Vascular Neurology Fellowship Program in the University of Michigan Medical School. She also is associate director of the Stroke Program.

Her research interests include stroke-related health disparities, sleep disorders in stroke patients, , and clinical trials in stroke. Dr. Brown has been a PI of 4 NIH R01 grants and currently serves as co-director of the University of Michigan Regional Coordinating Stroke Center as part of StrokeNet.

Dr. Brown's honors include co-chief resident in neurology at the University of Virginia in 2000-01, the 2008 Blue Cross Blue Shield of Michigan Foundation McDevitt Excellence in Research Award, and MICHR’s Exemplary Team Science Award for the Stroke Health Disparities Research Program that she co-directs with Drs. Lisabeth and Morgenstern. In addition, she has been listed among the "Best Doctors in America" each year since 2007.

Dr. Brown serves as an editorial board member of Neurology (and served on the Stroke editorial board from 2011-2015).. She has also been a member of an American Heart Association Peer Review Committee (2010-2015), including serving as co-chair and chair. Furthermore, Dr. Brown serves on the StrokeNet Trial Recruitment and Retention for Under-represented Minorities and Ethnicities Advisory Committee and Northern Manhattan Initiative for Minority involvement in Clinical Trials (NIMICT) Steering Committee.

Sleep disorders and stroke:  Dr. Brown is a principal investigator of an NIH-funded project to assess the frequency of sleep-disordered breathing after stroke, and the relationship of this sleep disorder to stroke outcomes . Dr. Brown is also the principal investigator on an NIH-funded project to study the treatment of stroke patients with sleep apnea. She further conducts studies on the pathophysiology of sleep apnea in stroke patients.