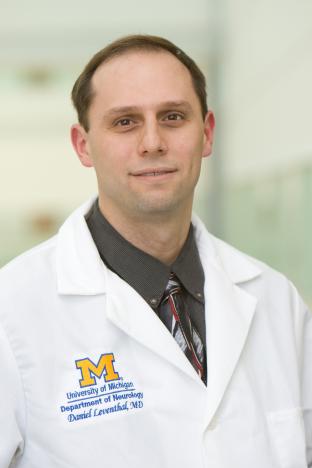 Daniel Leventhal, MD, PhD is an Assistant Professor of Neurology in the Movement Disorders division. His primary clinical duties are at the VA Ann Arbor Healthcare System, where he co-directs the Deep Brain Stimulation program for Movement Disorders. His practice there focuses on the treatment of Parkinson Disease, tremor disorders, dystonia, and related syndromes.

Dr. Leventhal completed his undergraduate degree in Physics at The College of William and Mary in Virginia in 1995, and a combined MD/PhD program (PhD in Biomedical Engineering) at Case Western Reserve University in 2004. He then pursued medical internship and Neurology residency at the University of Michigan (completed in 2008), followed by a combined Movement Disorders and postdoctoral research fellowship at Michigan. In 2012, he joined the Neurology faculty at Michigan, and joined the VA as a staff Neurologist in 2015.

Dr. Leventhal also directs a basic science laboratory at the University of Michigan. His research interests lie primarily in understanding the brain circuit abnormalities that contribute to the clinical manifestations of Parkinson Disease and related disorders. His laboratory uses advanced in vivo neuronal recordings and manipulations in rats and mice as they learn and perform complex behaviors.

Dr. Leventhal is a member of the American Academy of Neurology, Movement Disorders Society, American Neurological Association, and Society for the Neural Control of Movement.