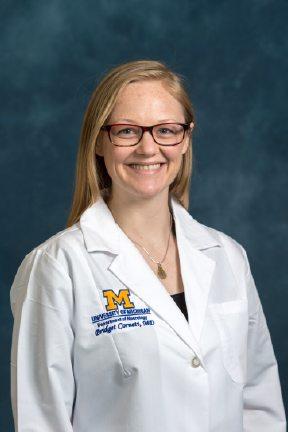 Dr. Cornett obtained a BA with honors in literature from Vanderbilt University in 2007, then worked at a law office in Nashville, Tennessee for several years. While reading through pages and pages of claimant medical records as an administrative and research assistant on disability and COBRA claims, she became interested in medicine. She returned to school from 2009-2010 during which time she completed an accelerated Post-Baccalaureate Premedical program including prerequisite courses and labs in biology, chemistry, organic chemistry, and physics at Bryn Mawr College in Pennsylvania. After completing her Post-Bac program, she worked as a lab assistant in Cincinnati Children’s Hospital assisting in research on neonatal pulmonary development for a year prior to starting medical school at University of Michigan in 2011. She was recipient of a Dean’s Merit Scholarship through University of Michigan Medical School and was chosen by her colleagues to deliver a commencement address at their graduation ceremony in 2015. She completed her intern year in Internal Medicine then subsequent three years in Neurology at this institution, and served as one of two Chief Residents for her Neurology class.

Dr. Cornett is a General Neurologist who diagnoses and treats a broad range of neurologic diseases, including headaches, peripheral nerve and muscle disorders, strokes, seizures, and parkinsonism. In addition to a predominantly outpatient clinical practice, she also serves as a Tele-Neurology consultant for the Mid-Michigan Medical System through which she provides Neurologic consultations to patients in MidMichigan Inpatient and Emergency Departments.