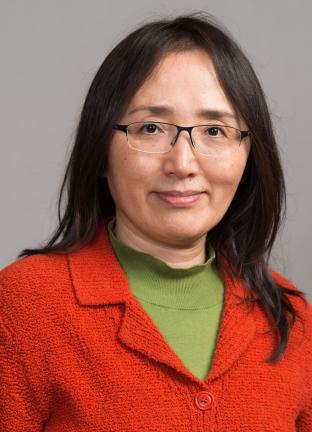 Dr. Borjigin was born and raised in Hohhot, the capital of the Inner Mongolia Autonomous Region of China.  She received her Bachelor’s degree in Physics and Master’s degree in Biophysics from Tohoku University in Sendai, Japan.  In 1994, she received her PhD in Neuroscience from the Department of Neuroscience at Johns Hopkins University under the guidance of Dr. Jeremy Nathans.  From 1994 till 1998, Dr. Borjigin received postdoctoral training in the laboratory of Dr. Solomon H. Snyder.  Her first independent position was in the Department of Embryology of the Carnegie Institution of Washington from 1998 to 2003.  Dr. Borjigin joined the Department of Molecular & Integrative Physiology in 2003 and was promoted to Associate Professor in 2009.  She also has a joint faculty position in the Department of Neurology.

Circadian Rhythms:  Almost all aspects of human physiology and behavior exhibit circadian rhythms.  How these rhythms are generated and coordinated temporally and spatially still remains incompletely understood. My lab aims to define the properties of the central circadian pacemaker in freely moving rodents by investigating how melatonin secretion is controlled under various conditions.  Our circadian studies are driven by a powerful approach perfected in our laboratory:  long-term (up to 100 days) pineal microdialysis to sample melatonin release at high-resolution (every 10-20min) in freely moving animals.  Using this technique, we have been able to uncover novel features of circadian rhythms that were previously unknown, including identification of rats with extreme chronotypes (rats with very early and very late melatonin onset).  In the next few years, we plan in depth characterization of these rats using a battery of techniques.  We also plan to investigate the role of chronotype in circadian physiology and behavior.  In addition, we plan to investigate the effect of light-at-night on circadian rhythms.  These studies will lead to a better understanding of basic properties of circadian timing.  They will also provide clues on how jet lag, shift-work, and light-at-night impact our circadian rhythms and health.

One of our on-going interests in circadian rhythms is to understand whether and how PINA (PIneal Night-specific ATPase, a pineal- and night-specific copper transporter spliced from the ATP7B locus) contributes to the pathogenesis of Wilson disease, a human disorder caused by defects in ATP7B.

Neuronal Plasticity:  Circadian secretion of melatonin by the pineal gland is controlled by the superior cervical ganglion (SCG) and the suprachiasmatic nucleus (SCN).  The SCN-SCG-pineal neural circuit is one of the simplest networks of the brain, and we are capable of measuring its output with high resolution using real time microdialysis and quantification of melatonin. We have recently characterized a model of neuronal plasticity after SCN-SCG-pineal injury.  When one of the two SCGs is removed, the melatonin secretion is reduced to 50% initially, but, interestingly, it fully recovers within 36 hrs.   It is not well known how the pineal gland can functionally recover so rapidly and completely.  We have recently identified a strain of rats that fails to consistently recover after unilateral SCG injury.  One of our current projects is to characterize this strain of rats, with the goal of uncovering the genetic and biochemical basis of functional neuroplasticity.

Brain Information Processing:  One of our newest projects is to define electrical oscillations of the brain at the systems level in animals experiencing global hypoxia or global ischemia.  This new line of research utilizes physical principles of vibrations and waves and mathematical modeling of brain oscillations, and will be performed in collaboration with experts both in and outside of the UM.  These studies aim to provide a better understanding of how the brain processes cognitive information in health and disease.