Jonathan and Lisa Rye give $2.5 million to U-M Scleroderma Program to honor son’s progress – after 14-month quest for correct diagnosis. 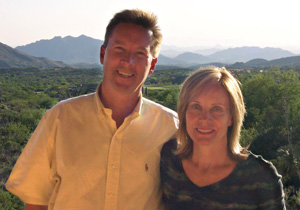 “July 2004:Calvin tries to sleep a lot, takes his Zithromax and sticks to his high cholesterol diet. He tries to exercise more but it causes great pain afterwards. He takes warm baths to soothe the aching… He still has no flexibility and feels no improvement in terms of achiness. Over the past 7 months he has lost 8-10 pounds…When I massage him, I feel how hard his hands, wrists, arms, feet, ankles and lower legs are. All the tissue feels bound together.”

(An entry from an informal journal kept by Lisa Rye, during the agonizing months she and her husband Jonathan spent frantically working to determine the cause of their son Calvin’s rapidly-declining health.)

A week after Jonathan and Lisa Rye’s son, Calvin, showed them what looked like a faded bruise on his left leg, the family’s dermatologist diagnosed morphea – a usually benign skin condition.

However, a month later, when Calvin experienced aching joints and such loss of flexibility that he regretfully gave up the high school sports he loved, his pediatrician recommended he see a rheumatologist.

Embarking on a medical odyssey that is often too familiar to those (or their loved ones) who suffer from rarer or more difficult-to-diagnose conditions, the Ryes endured trips to multiple specialists, resulting in multiple diagnoses and multiple courses of treatment – yet nothing seemed to help.

Instead, as Calvin’s pain continued to increase, and the skin of his lower arms and legs grew progressively shiny over his hardening and increasingly rigid underlying bound-down tissue, the couple began keeping a journal of their son’s ever-worsening symptoms, and tirelessly searching the Internet for clues.

Fourteen months and many doctors later, some photos they discovered on the internet led the Ryes to request another biopsy. A pathologist diagnosed eosinophilic fasciitis – a rare and often quite serious condition related to scleroderma characterized by symmetric and painful inflammation and a dramatic loss of elasticity in the tissues of the arms and legs.

The Ryes were devastated by the news, but were relieved to finally have a solid diagnosis. Nonetheless, they continued their quest for answers, and remained determined in their search for more effective treatments for their son’s condition.

Lisa Rye describes the complicated series of events that followed – events that led them to the University of Michigan – first to David Olson, Ph.D., then, ultimately, to the U-M’s world-renowned scleroderma specialist James R. Seibold, M.D. – as being the result of nothing short of “synchronicity”.

That’s because when Dr. Seibold took a closer look at Calvin and his biopsy tissue sample, he was quickly able to determine that Calvin’s illness was not eosinophilic fasciitis, but another very rare condition in the scleroderma family of diseases – generalized subcutaneous morphea. With the diagnosis established, the correct path to treatment could begin.

Lisa Rye recalls her relief and joy in finally finding a doctor who understood what was happening to her son:

“As we watched our son’s extremities harden, his fingers curve and his hands lose all strength, we lived a nightmare, and we could only imagine how painful it was for Calvin,” says Lisa.

“We kept thinking that this kind of horror shouldn’t happen to anyone. That’s why we were so relieved, and so grateful when finally Jim Seibold was able to correctly diagnose and begin to effectively treat Calvin’s condition.”

Today, as Calvin Rye continues his treatments at U-M, his condition has improved dramatically. He is exercising to regain lost mobility from the scar tissue that formed in his hands, arms and legs. He is back to playing tennis and ping-pong, and doing well in his second year as a U-M student.

Impressed by the expert and compassionate care they had received from Seibold, Jonathan and Lisa Rye soon began asking themselves how they might help others struggling with scleroderma and related conditions.

Therefore, in honor of what Lisa Rye describes as “the ordeal our son Calvin endured, the expert care he eventually received, and the grace of God,” the Ryes decided to give $2.5 million to support the U-M Scleroderma Program.

“When we began to learn about how Dr. Seibold had dedicated his career to finding effective treatments for scleroderma and other, associated conditions, Lisa and I were inspired to commit our energies and money to aiding him and his research team with the great hope of solving this disease’s mysteries and helping generations to come,” says Jonathan.

A complex and little-understood condition, Scleroderma causes tightening of the skin as well as progressive, life-threatening damage to the internal organs, including the heart and lungs. There is no cure, and its cause is unknown, although great strides are being made in managing its complications. It affects 150,000 patients in the United States and perhaps 1.5 million worldwide, mostly women in their child-bearing years. It is the most fatal of all rheumatologic diseases.

Based in the Division of Rheumatology within the Department of Internal Medicine, the U-M Scleroderma Program was organized two years ago as a multidisciplinary effort to bring together experts from a variety of specialties, such as Pulmonary Medicine, the Pulmonary Hypertension Program, Pediatric Rheumatology, Hand Surgery, Occupational Therapy and the Center for the Advancement of Clinical Research to develop and implement a comprehensive approach to scleroderma research, education, and patient care.

James R. Seibold – a Professor of Internal Medicine who came to the University of Michigan from the Robert Wood Johnson Medical School in New Jersey two years ago to develop and direct the new program – says he was attracted, in large part, by Michigan’s reputation as a world-class research institution.

“I believe Michigan’s extensive clinical and scientific assets – including its expertise in vascular biology and pulmonary medicine – make it the ideal environment for cutting-edge multi-disciplinary research aimed at reducing suffering, preventing death, and – ultimately – finding a cure for scleroderma,” says Seibold.

That confidence is echoed by Jonathan and Lisa Rye.

Displaying the same drive and tenacity they exhibited during the long struggle to solve the mystery of their son’s medical condition, the couple has taken an active role in supporting the U-M Scleroderma Program that goes beyond their generous financial contribution. The Ryes receive regular updates on the Program’s research efforts, and meet regularly with Seibold and other researchers to help devise strategies for helping the Program move forward.

Through their efforts, says Seibold, the Ryes have become partners in helping to advance the Program’s core mission.

“I think Jim Seibold possesses the unusual combination of being a wonderful healer and a great scientist,” says Jonathan Rye. “Through our efforts, Lisa and I seek to highlight and accelerate the progress of his work by utilizing the power of interdisciplinary research at the U-M to find more effective treatments – and hopefully one day, a cure – for scleroderma.”