The Division of Nephrology is dedicated to serving people with kidney disease. Despite major advances in medicine, kidney disease continues to increase and has reached epidemic proportions worldwide. Faculty in the division practice and teach optimal care for patients with a broad spectrum of kidney diseases at all stages. In addition, faculty members are actively involved in high-quality basic science, outcomes, and clinical research aimed at better treatment options as well as prevention of kidney-related health issues.

We provide state-of-the-art care to patients from across the country in all areas of kidney disease – acute and chronic kidney diseases, cystic diseases of the kidney, diabetic kidney disease, fluid and electrolyte disorders, glomerulonephritis and glomerular diseases, lupus, hypertension, kidney and pancreas transplantation, kidney-related metabolic disorders, kidney stones, and rate and genetic kidney diseases. Our division consists of over 50 faculty members who care for patients at the Nephrology Clinic at Taubman Center, Nephrology at Brighton Center for Specialty Care, Nephrology at Northville Health Center, and the University of Michigan Hospital.

Our faculty are conducting exciting and innovative basic science, clinical, and outcomes-based research, all devoted to finding new ways to prevent and treat kidney disease. Research achievements include:

Focused on Education and Training

Our division prides itself on the high value we place on education and training for faculty and fellows. We work continuously to improve the understanding, diagnosis, treatment, and prevention of kidney disease, whether it’s through our:

In addition to Dr. Pennathur's role as Chief for the Division of Nephrology, he also serves as the Director of the Molecular Phenotyping and Metabolomics Core and the Physician Scientist Program in the Department of Internal Medicine.

Dr. Pennathur's research has focused on the applications of biological mass spectrometry in disease pathogenesis. His lab has utilized mass spectrometry to identify key protein and metabolite alterations in disease states and tested the hypothesis whether these alterations predict complications in animal models and humans. Their strategy has been to develop analytical techniques in animal models and validate these markers in humans and then interrogating the animal model for biological pathway relevance. Recent extension of this work has included targeted as well as unbiased metabolomic and proteomic profiling. 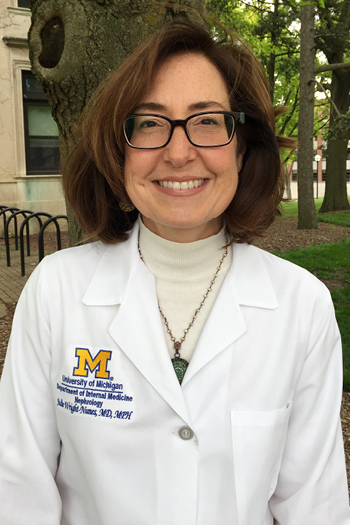 Established in 1964, the University of Michigan Division of Nephrology has grown tremendously over the last 50 years and is now internationally recognized for its patient care, research, and education. The division's success today has been built on a tradition of excellence which first started when Dr. John M. Weller accepted to become Nephrology's first division chief.

Dr. John Weller earned his bachelor’s degree at the University of Michigan in 1940 and his Doctor of Medicine degree at Harvard in 1943. After a decade in which he completed his residency and taught at Harvard, he returned home to the University of Michigan as an assistant professor in 1953. Shortly following his arrival, he was called away for a year and a half service in the U.S. Army Medical Corps. Following his stint in the Army, Dr. Weller resumed his career at the University of Michigan, rising up through the ranks in Nephrology to become a full professor in 1963. He was tapped to become Nephrology’s first division chief as the growing unit was formed into an independent division of Internal Medicine in 1964. Dr. Weller held membership in numerous professional societies, played a key leadership role in the activities of the National Kidney Foundation of Michigan, and was the author of numerous scientific publications as well as several books concerned with diseases of the kidney. Dr. Weller held the position until 1977.