James Van Gundia Neel, M.D., Ph.D., was a pioneer in the study of human genetics and one of the first to foresee its importance in the diagnosis and treatment of medical conditions. During his 39-year career in the U-M Medical School, Neel established one of the first clinics to evaluate and counsel people with hereditary diseases, as well as the first academic department of human genetics in the United States. 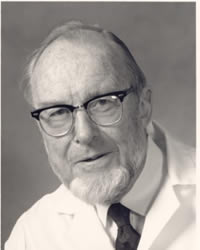 Trained in Drosophila genetics with Curt Stern and in medicine at the University of Rochester, he became the founder of the field of medical population genetics. Neel joined the University of Michigan faculty in 1946 as an assistant geneticist in the Laboratory of Vertebrate Biology. From late 1946 to 1947, he served in the Army Medical Corps and directed field studies for the Atomic Bomb Casualty Commission of the National Research Council. In 1948, he returned to the University of Michigan to direct the Institute of Human Biology's Heredity Clinic. He established the nation’s first Department of Human Genetics at Michigan in 1956 as well as one of the first clinics to evaluate and counsel people with hereditary diseases, and was its chair for 25 years. He was named the Lee R. Dice University Professor of Human Genetics in 1966 – a position he held until his retirement on June 30, 1985.

During a distinguished career spanning more than 60 years, he made major contributions to our understanding of the genetics of several human diseases including diabetes mellitus, neurofibromatosis, and sickle cell anemia, of the effects of atomic radiation on humans, and of the genetic structure of Amerindian populations. Dr. Neel published over 500 papers and several books, including his autobiographical memoir, Physician to the Gene Pool. A member of the National Academy of Sciences and its Institute of Medicine, the American Academy of Arts and Sciences, the American Philosophical Society, and the Association of American Physicians, he was honored with the Presidential Medal of Science, the Lasker Award of the American Public Health Association, the Allan Award of the American Society of Human Genetics, and the Colonel Harlan Sanders March of Dimes Birth Defects Foundation Award for lifetime achievement in clinical genetics. A pioneer human and medical geneticist, he always kept foremost the perspective of the physician, and a keen sensitivity to the societal implications of the new knowledge he discovered. He died February 1, 2000 at age 84.

Funds for the J.V. Neel Lectureship and Graduate Student Fellowship come from donations from current and former Human Genetics faculty, alumni, postdoctoral fellows, staff, friends of the Department, and the Neel family, in supporting Human Genetics graduate education. In line with Dr. Neel’s ideals, applicants for the Fellowship Awards will be selected first and foremost based on quality, and secondly, on need – to put these funds where they will do the most good for the students and the Department.

Both awards are presented at the Annual James V. Neel Memorial Lecture.

Donations to the Neel Fund(s)