The Adaptive Sports and Fitness program, led by Dr. Okanlami, is proud to mark this notable milestone in its mission to create equitable opportunities for student-athletes with physical disabilities to compete in intercollegiate-athletics. 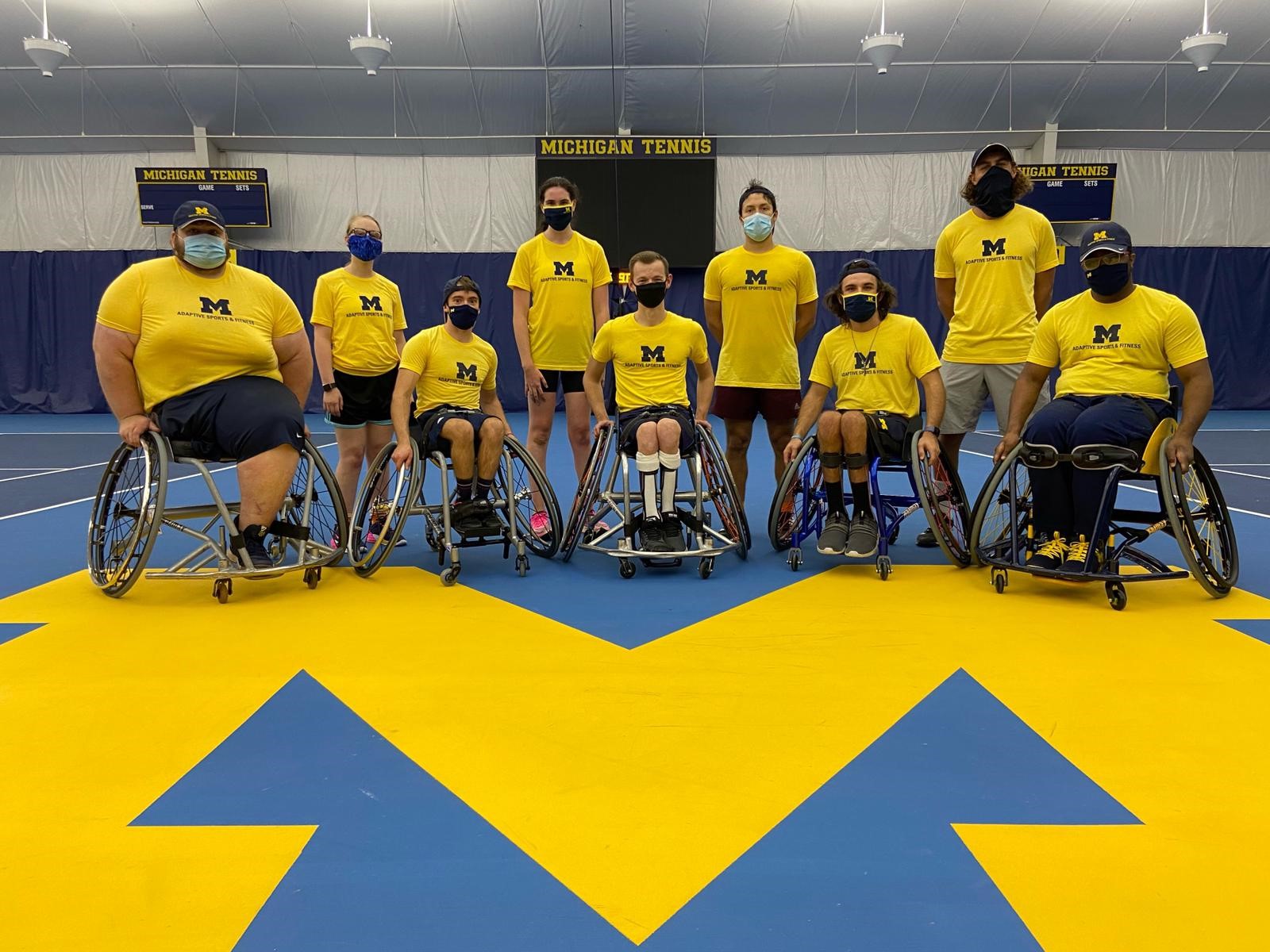 With gratitude from the Adaptive Sports and Fitness community at the University of Michigan, the Lederer and Miller families have established an award for an Adaptive Tennis Head Coach that will lead our wheelchair tennis team for years to come. We are excited to announce that Garrett Patton has been selected as the inaugural recipient of this award.

Saul Lederer (1921-2020) was a cherished father, grandfather, and great grandfather of several Wolverines, and a devoted fan of University of Michigan athletics. He was an avid lifelong tennis player and supporter of access to tennis for all players. He was a staunch advocate for disability rights and admired those who faced obstacles with strength and persistence. His family created this annual award to honor his life and his memory.

Coach Patton is in his second season in his concurrent role as volunteer assistant coach for the Wolverines Men’s Varsity Tennis Team. Prior to Michigan, Patton was the associate head coach at Cal Poly where his teams reached three consecutive Big West Conference finals. Patton also served as a USTA National Hitting Coach on the Professional WTA Circuit and played in the Futures Professional Circuit. Patton played collegiate tennis at Boise State where he led the Broncos to a national ranking of No. 15 in 2014 and compiled an overall singles record of 91-45. His teams won four Mountain West Conference Team Championships and made four NCAA appearances. He started volunteering with the University of Michigan wheelchair tennis team in 2019, and when asked about this new award Oluwaferanmi O. Okanlami, M.D., M.S., assistant professor of family medicine, physical medicine & rehabilitation, and urology; interim director of servies for students with disabilities; and director of adaptive sports & Fitness - Director of Adaptive Sports & Fitness - had the following to say about him:

“ Coach Patton’s experience as a leader, coach, and athlete are only rivaled by his passion for supporting our adaptive tennis athletes. We are grateful for the opportunity to have him officially join the program and we look forward to watching our athletes continue to grow under his leadership as we prepare for the 2021 Collegiate National Wheelchair Tennis Championships.”  Coach Patton added that “the student-athletes on this team show up to practice every day with enthusiasm to compete. I see the game bringing joy to so many people.”

One of those people is Christopher Kelley, a first year graduate student studying Sports Management in the School of Kinesiology, who also just happens to be one of the top men's wheelchair tennis players in the nation, and is a member of Team USA. “I have had the honor and privilege of playing for multiple wheelchair tennis teams under the guidance of some of the top tennis coaches for our sport, and can say with the utmost respect that Garrett Patton is a great addition to this program. He brings so much knowledge and passion to this team. I am so proud to be a Michigan wheelchair athlete under his guidance and cannot wait to see our continued progress and success as a team,” said Kelley.

The wheelchair tennis team practices five days a week at the U of M varsity tennis center, with additional support from PM&R resident Dr. Johan Latorre. Pending COVID-19 policies, the entire program is gearing up for a training camp and competition series at the University of Alabama with their own Adapted Athletics program.

For questions about the program, please contact Erik Robeznieks at erikrob@umich.edu.